About Love, Sex, and Other Matters of the Heart and Mind 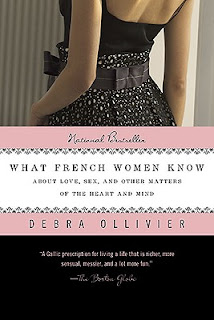 Debra Ollivier's book is not exactly the how-to I thought it would be.
How to feel sexier...
How to be more sophisticated...
How to enjoy the pleasures of fresh food...
Or how to more enjoy the pleasures of intimacy...
In fact, the book is more of a comparison of American women and French women. There are clear cultural differences between the French and Americans. However, I think this concept is widely over generalized in the book and also by my expat friends here in New York City. America is a land mass with over 310 million people, which I believe makes it hard to have anything uniquely American. Compare that to France that has only 65 million people and history that dates back to 500 B.C. America is too diverse of a population for anyone to say that we are all puritanical nincompoops - who have no personal dignity and don't believe in sex after 50 (This is my interpretation of the undertone in the book). I found this book condescending and at times appalling.
Ollivier says, "Growing up or being a grown up in America has never seemed like so much work, nor has it ever seemed so curiously childlike." In comparison she says, "If French Women still seem like players in that infinite game of romance, it's mainly because they are comfortable being grown-ups. They act their age. They essentially look their age." What an alarming generalization! Why does Mrs. Ollivier believe that there are only two types of American women? (1) The age-denying self-improving freak who doesn't act her age and thinks that cosmopolitan headlines are gospel OR (2) The dried up old prune who is uncomfortable with intimacy after a certain age.
I for one am quite comfortable being a grown-up and plan to evolve into an even more confident and sophisticated adult as I better understand my career interests and travel more. I refuse to become, as Isabelle de Charrière put it, "a pretty goldfish circling endlessly in a Japanese fishbowl."  This is why kittens, as modern women, we need interests and goals.
Regarding aging and how certain populations of women age more gracefully - I can admit that I have encountered my fair share of middle-aged Persian, French,  or Italian women who made me doubt my own sophistication and sex appeal. These women take care of their bodies, are lifetime learners, and always maintain a strong sense of self.   I cannot say the same for middle-aged American women I've encountered (a generalization, I know). We 20 or 30 something Americans should start a sophistication revolution. Forget anti-aging or age-denying. Let's rally together and age with grace and dignity, like, for example Zsa Zsa.
I also agree with Ollivier's comparison of what is perceived as beautiful in France versus the States. In France, the unusual and unique is what's considered beautiful. As Proust put it, "Let's leave the obviously pretty women to men with no imagination." In America, for the most part, there is one standard of beauty.
I leave you with a quote from the book.
"All I've done my life is disobey." - Edith Piaf
If all goes according to plan, 25 years from now, I hope to say the same thing about my life.
p.s. Here are my responses to the "how-to be" questions above:
...wear beautiful lingerie
...cultivate opinions and be a lifetime learner
...buy it, cook with it, and eat it
...relax
Posted by Victoria at 10:30 AM