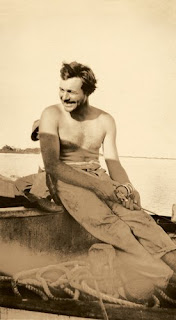 How awesome is Hemingway? It's crazy.

And the fact that stuff like this actually happened is just dumbfounding to me:

"In 1954 he was given the Nobel Prize. Gabriel García Márquez, still a journalist, caught sight of Hemingway and his wife in Paris one day in 1957 walking along the Boulevard Saint-Michel. Hemingway was wearing old jeans and a lumberjack’s shirt. He had long been one of García Márquez’s great heroes, for his myth as well as his writing. The Old Man and the Sea had hit García Márquez “like a stick of dynamite”; he was too timid to approach Hemingway but also too excited not to do something. From the opposite side of the street he called out, “Maestro!” Hemingway raised a hand as he called back “in a slightly puerile voice,” “Adios, amigo!”"

The Finest Life You Ever Saw.
Posted by Victoria at 2:57 PM