...and change the way your brain processes the world and see what your brain is actually capable of. Sound fun right? Throw out impossible-to-maintain-resolutions and start here.

3-gratitudes - 3 new things you are grateful for for 21-days in the row. 3 new things each day.
Journaling - 1 positive experience you've had over the past 24-hrs.
Exercise - teaches your brain that your behavior matters.
Meditation - allows your brain to get over the cultural ADHD that we have been creating by multi-tasking.
Random acts of kindness - daily.

Oh and don't forget to smile.

Start the revolution! Do it now! Create ripples of happiness.
Posted by Victoria at 4:13 PM 1 comment:

Seen and be seen

Now you see me, now you don't. It's like magic the way I disappear and reappear. Or maybe it's not.

Life has been changing before my very eyes and it is nothing short of exciting. I'm having a love affair with change. Please don't be jealous it is entirely scary too.

I love this short story by Joan Didion as it reminds me of my old self, all the doing for the sake of doing. Today I only do for the absolute pleasure of doing.

Later I'll tell you why I've retired
my passport (for now).

Last note: To Mister DID, you will love this story, read it.

GOODBYE TO ALL THAT by Joan Didion

It is easy to see the beginnings of things, and harder to see the ends. I can remember now, with a clarity that makes the nerves in the back of my neck constrict, when New York began for me, but I cannot lay my finger upon the moment it ended, can never cut through the ambiguities and second starts and broken resolves to the exact place on the page where the heroine is no longer as optimistic as she once was. When I first saw New York I was twenty, and it was summertime, and I got off a DC-7 at the old Idlewild temporary terminal in a new dress which had seemed very smart in Sacramento but seemed less smart already, even in the old Idlewild temporary terminal, and the warm air smelled of mildew and some instinct, programmed by all the movies I had ever seen and all the songs I had ever read about New York, informed me that it would never be quite the same again. In fact it never was. Some time later there was a song in the jukeboxes on the Upper East Side that went “but where is the schoolgirl who used to be me,” and if it was late enough at night I used to wonder that. I know now that almost everyone wonders something like that, sooner or later and no matter what he or she is doing, but one of the mixed blessings of being twenty and twenty-one and even twenty-three is the conviction that nothing like this, all evidence to the contrary notwithstanding, has ever happened to anyone before.

Of course it might have been some other city, had circumstances been different and the time been different and had I been different, might have been Paris or Chicago or even San Francisco, but because I am talking about myself I am talking here about New York. That first night I opened my window on the bus into town and watched for the skyline, but all I could see were the wastes of Queens and big signs that said MIDTOWN TUNNEL THIS LANE and then a flood of summer rain (even that seemed remarkable and exotic, for I had come out of the West where there was no summer rain), and for the next three days I sat wrapped in blankets in a hotel room air conditioned to 35 degrees and tried to get over a cold and a high fever. It did not occur to me to call a doctor, because I knew none, and although it did occur to me to call the desk and ask that the air conditioner be turned off, I never called, because I did not know how much to tip whoever might come—was anyone ever so young? I am here to tell you that someone was. All I could do during those years was talk long-distance to the boy I already knew I would never marry in the spring. I would stay in New York, I told him, just six months, and I could see the Brooklyn Bridge from my window. As it turned out the bridge was the Triborough, and I stayed eight years.

Excuses are for losers 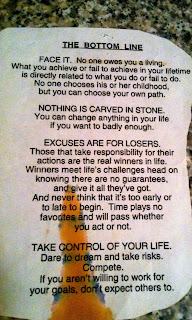 This is a piece of paper that I've had for over ten years. An English Teacher at my high school had this posted on his door. I'm not sure how I obtained it, I may have taken it or asked him for it, but I've had it ever since. Whenever I feel uninspired, lazy, or like I need to improve on a skill -- I dig it out and read it. I remind myself of the person I once was and, hopefully, continue to be.

I'm not writing this to encourage you to find your spirit. I've done that before. I like the memory and I want to share it with you. If you are inspired as a result then that's good too.

If I were rewriting these words to myself, today, I would say following:

FACE IT. No one owes you a healthy body. Eating cookies for breakfast is directly related to how you feel later today. Oooooppps.

"Beautiful young people are accidents of nature, but beautiful old people are works of art."

-Eleanor Roosevelt
Posted by Victoria at 10:50 AM No comments:

Read this poem, Melville wrote it from the rooftop of his apartment during the 1863 NYC draft riots, as he watched most of Manhattan burn.

Posted by Victoria at 9:25 AM No comments:

First, I'd like to apologize for my long hiatus. I hope I haven't lost my spatter of readers, at least not entirely. I haven't posted in a long, long time, because I have had some recent events that made me think, "Do I really want to do this anymore?"

The first is I discovered the website get off my internets (GOMI), where I discovered that the majority of popular blogs are all doing it for money/perks. I've always know that people blog for so many reasons beyond venting and ranting, but I guess I never quite realized the contrived nature of blogging. Think of this as a light bulb moment for me. I know, I know, I know, I was naive! And this discovery should not change that I enjoy sharing parts of my life with all of you, but it did make me reconsider my goals for the blog and my approach.

Following my GOMI discovery, I bumped in to (saw from a very safe distance at a Mexican airport) yet another popular blogger, someone who is written up on GOMI. This is the fourth time that this has happened to me (one blogger happens to live in my neighborhood). Run-ins with people who style and design their lives ruins the mystique (for me). You can't help but think that these people are ordinary people and that, really if you think about it, everyone poops, (i.e. does ordinary, everyday things) We don't all spend our days posing for photos on well-selected street corners. Or do we...grab the camera Ethel!

So all of that caused me to take this time out. In addition, the original idea for blog was to find my life's calling and I think maybe I found it. I'm not exactly ready to share, but you will see. For now, I'll continue to post, because, well...I like you.  I'll try to keep my posts honest, relevant, and informative.

Some other amazing discoveries during my hiatus include: 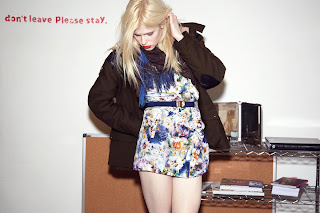 A funny (I mean hysterical) Q&A between Jadakiss and Siri.

All the single ladies

Interesting article from the Atlantic.
Posted by Victoria at 1:08 PM No comments: